SEC's Proposed New SPAC Rules - Is it a Blow?

On March 30, 2022, during an opening meeting, the Security and Exchange Commission proposed a new set of rules for SPACs, in line with its well-known harsh rhetoric. The debuted rules mainly focus on tightening disclosures. Are the rules justified? Are they fair? What will change? 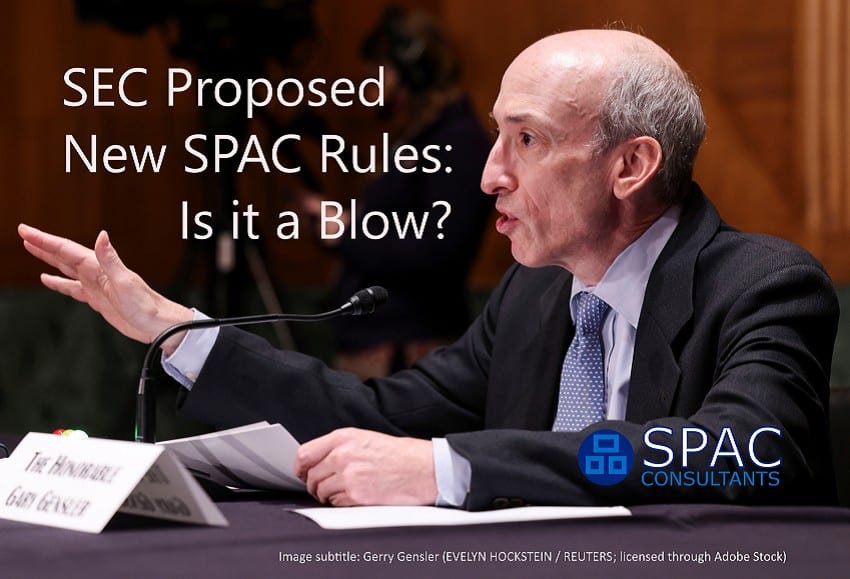 The new SPAC rulebook, yet a proposal, has the potential to take away many of the advantages of SPACs over traditional IPOs. In very brief, the new rules aim

We are not going to explain the rules in detail here, because they have been published by many entities and news channels since publication, sometimes together with evaluations. We encourage the reader to read at least the following two sources:

The 372-page paper published by SEC outlining the rules can be found here.

There is also a very good summary with some evaluations published by Marcum Bernstein & Pinchuk LLP.

Transparency is of course welcome, and so is protection of retail investors. However, the SEC is attempting to introduce rules for SPACs that go beyond the rules applying to traditional IPOs and thus raise the question of equal treatment.

Since 2020, the market has seen some aggressive valuations as basis of SPAC merger agreements with private companies. ‘Aggressive’ valuation in this context means over-valuation, as in the cases of pre-market startups valued billions of US Dollars.

When a Special Purpose Acquisition Company acquires a pre-market startup that is not even close to successful market entry, such SPAC is actually acting as a kind of venture capitalist. It is well known that about eight of 10 startup fail at some stage, be it prior to market entry or after market entry. We believe that institutional and retail investors are not keen to see their funds risked as venture capital. Well, the sharply increasing redemption rates (redemption by IPO investors, prior to business combination) and the very low post-merger share prices of many SPACs are the result of such conduct.

The U.S. Securities and Exchange Commission plans to oblige SPACs to publish whether the de-SPAC transaction and its related financings are fair or unfair to investors. The criteria for being fair or unfair could be viewed from many different aspects and angles and would always keep a door open for litigations. If this rule remains, SPAC boards will likely arrange for third-party fairness opinion as a basis for the then required statement of fairness.

Forward-looking statements published by SPACs have often been over-optimistic, driven by enthusiastic assumptions to attract investors of a SPAC.

The Securities and Exchange Commission aims to abolish the liability safe harbour rule for forward-looking statements and putting possible liability on any person directly or indirectly involved in a SPAC. This is definitely unfair insofar as SPACs cannot be held liable for future market conditions and projections, which are the basis of evaluation of any envisaged investment, including simple currency trades.

It was never a secret that the SEC did and does not like the generally better deal conditions for SPAC sponsors, compared to the conditions for public investors. It also argues that retail investors may struggle to understand the complicated terms of warrants or that they may be unaware when they can redeem them.

Furthermore, we cannot agree that it the terms of warrants are too complex to be understood and that retail investors may not understand when they can redeem warrants. The conditions are very clearly published in the prospectus (S-1) of every SPAC.

Underwriters of SPACs will have to face increased liability as well, if the Securities and Exchange Commission’s proposals become rules. SPAC underwriters who participate in any way in PIPE financing or in the de-SPACing (which is often the case through consulting at least) transaction will be deemed as underwriter of the de-SPAC itself. This would impose the duty of extensive due diligence related to the merger transaction, far exceeding their liability in case of traditional IPOs.

Consequently, CITI Bank already stopped any further engagement in SPACs, in fear of any possible litigation risk, as the bank does not see itself able to calculate its risk for the time being.

Concluding; we hope that U.S. entities involved in the SPAC space will provide the necessary insight and convince the SEC to take a more reasonable and balanced view and opinion during the public comment period, and that the new rulebook for SPACs will both protect retail investors at a fair level and provide a fair and supportive basis for SPACs.