SPACs – For Investing in Acquisitions, or for IPO Capital Raising

Going public on NASDAQ or NYSE, raising capital for acquisitions, participating in gains

From Setup to IPO

What makes us different from all others?

We provide you with independent advice and candid consulting, naming the dos and don’ts, the strong and the weak aspects of your SPAC project.

And we have a particular interest to do so: Your success is our success!

We mean it, literally. 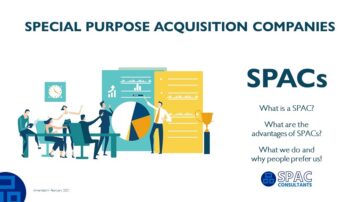 SPACs – For Investing in Acquisitions, or IPO Capital Raising

Setting up a SPAC requires much more than just the technical details. The way a SPAC is structured, considering the right psychologic moments and a SPAC’s possible dynamics, will determine the attractiveness of a SPAC and thus its success.

Please click the image on the upper right to view our SPAC presentation.

What is a SPAC?

A SPAC, an acronym for Special Purpose Acquisition company, also called blind-check company in the US, aims to raise funds from the market through an IPO and then to acquire a private business by acquiring its shares. SPACs have 18 to 24 months from IPO to announce their acquisition. Should they fail to do so, they expire and must be liquidated.

When going public, SPACs are shell companies that have no business and assets at that time. However, they are still extremely interesting mainly for large institutional investors to invest in during IPO. Their features are a great and promising acquisition strategy and a board that comprises qualifying members that are entrusted to take the SPAC to success by landing a great acquisition deal.

How does that work out?

SPACs typically acquire the shares of one or more private companies of a total value of three to four times of the IPO proceeds on trust account. This dynamic thus determines the IPO size needed to fit the acquisition strategy.

A SPAC’s acquisition strategy is to be published in a prospectus approved by S.E.C.; it describes the goal of a SPAC’s acquisition(s) in a rather broad way, defining the industry or technology or geographical area or type of companies a SPAC plans to invest in.

The board of a SPAC are a key factor for its success, both on IPO and for a successful deal, meaning the acquisition, which is also called business combination in the SPAC space.

Most SPACs get listed either on Nasdaq or NYSE. Despite a few SPACs listed on various stock exchanges in London, Amsterdam, Paris and Milano, Europe has not been able to establish itself as a preferred SPAC listing jurisdiction.

SPACs are often called blank-check companies in the United States of America, because SPACs get provided with hundreds of millions within two to three days after IPO despite the fact that they are a kind of shell companies. Large institutional investors provide their funds to a SPAC, hoping for a great acquisition and gain.

However, all IPO proceeds are paid to a trust account and not to a SPAC’s current account with a bank. Once the SPAC board negotiated and decided on an acquisition, the IPO investors are required to provide their approval.

Thus, it is not really an unconditional blank check a SPAC is provided with.

Once the institutional IPO investors did approve a SPAC acquisition, the SPAC acquires the shares of a private company and the company acquired gets merged into the SPAC, thus becoming a listed company. This procedure is called “business combination”, and it is the moment of “de-SPACing” of the SPAC, because it is not a Special Purpose Acquisition Company anymore.

Typical phases of a SPAC – from setup to IPO

A group of businesspeople, typically experts in a specific industry and often running their own related business, have a vision to take an idea, a technology, or a business to a higher level. The motivation might be to further develop a new technology, to apply a new technology and to create products ready for market entry, or to achieve economy of scale and market penetration, or similar.
The goal is to leverage their expertise and know-how by raising capital for the acquisition of a larger company that would serve their goal.
Their choice is to set up a SPAC, a Special Purpose Acquisition Company to be listed at Nasdaq or NYSE.

This group of businesspeople have some funds to provide the necessary SPAC sponsor capital, which will be their IPO contribution, also called skin-in-the-game. Alternatively, they may find additional pre-IPO investors who are keen to sponsor their SPAC.
On IPO, SPACs typically raise approximately 20 times of the funds provided by the SPAC sponsors. To give an example; if a SPAC plans an IPO size of USD 200 million, the necessary SPAC sponsor capital would be around USD 10 million.
SPAC sponsors might be the said group of businesspeople themselves, or any individual investors who will then become SPAC founders as well. During 2020, private equity funds discovered sponsoring SPACs, benefiting from the clearly defined exit strategy of SPACs, which is remarkable shorter than for classical direct private equity investments.
Sometimes, a group of sponsoring pre-IPO investors might be organized in form of a Registered Alternative Investment Fund (RAIF). In that case, the pre-IPO investors invest in fund units and the Registered Alternative Investment Fund sponsors a SPAC.

On the day of IPO, SPAC Sponsors receive “units”, consisting of one common share and one warrant for each 10 Dollars invested. SPAC IPO shares are typically offered at a price of 10 Dollars, while the execution price of warrants is 11.5 Dollars.
Additionally, SPAC Sponsors are vested with pre-IPO SPAC founder shares, which get listed on the day of IPO. The typical standard in the market is to provide SPAC sponsors with 20% of the SPAC founder shares.
However, when SPAC CONSULTANTS is structuring SPACs, we are generally finding the right formula to provide SPAC sponsors with remarkable more founder shares, resulting in a larger portion of common shares eventually owned by the SPAC sponsors.

The costs and expenses to set up a SPAC are generally in the range of USD 650,000 to 800,000, depending on what is included in this calculation. About two thirds of the costs and expenses are to be paid by the SPAC founders and sponsors, while the remaining balance is covered from the IPO proceeds.

After all details of a SPAC have been decided, including the SPAC board members, the first step is to prepare a prospectus and to file it with S.E.C.

During the following IPO, the SPAC will receive the envisaged IPO proceeds within a few days on trust account.

From the day of IPO, a SPAC has 12 to 18 months to announce an acquisition, as per its acquisition strategy defined in the prospectus. With an additional approval by S.E.C., this period can be extended to a total of 24 months.

What we can do for you

Your SPAC idea and concept

SPAC Consultants and its partner network can advise you on the business structuring of a SPAC and introduce you and your SPAC idea and concept to the right parties, all of them the heavy weights in the SPAC space who were involved in most SPACs until today.

Interested to setup up a SPAC or to invest as a sponsor?

If you are interested to set up a SPAC to raise capital for your acquisition project(s), please contact us now. You will benefit not only from our expertise but also from our unbiased evaluation of your SPAC project, our independent advice and professional services setting up your SPAC and and successfully floating its IPO.

Should you be interested in getting involved as a sponsor of a SPAC, we will be happy to present you “ready-made” SPAC concepts from various industries, which top-class management teams ready and post-IPO investment strategy and specific goals defined.